New feature at Chrome > To create a new Google Form or Doc or Sheet directly from a new tab, type “form.new” or “doc.new” or “sheet.new”. 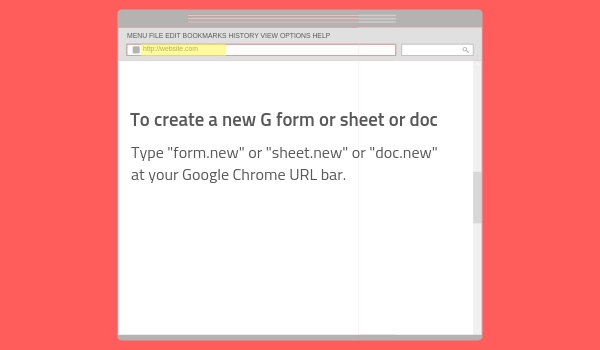 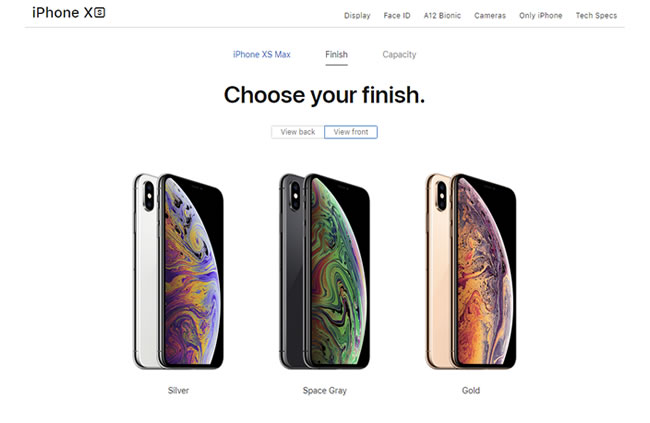 Good news Malaysia Apple fans! iPhone XS and XS Max will be in store soon and now available for booking. The selling price starts at RM4,999 (iPhone XS 64GB) and goes all the way up to RM7,049 (iPhone XS Max 512 GB).

In context – the median monthly salaries for Malaysian workers, based on 2017 survey by Malaysia Statistic Department, is RM2,160. Employees with tertiary education of 3.3 million persons earn a median salary of RM4,320 (source)*.

So if you work out the simple maths – Should an average Malaysian want a new iPhone, he or she will need to spend three, or four months worth of salary.

It’s obvious now that Apple wants their iPhones to be expensive.

They want the majority can’t afford their products.

Weeding out the “poor” is good for Apple.

If you can’t afford an iPhone – it’s YOUR problem; not Apple’s

The Company posted quarterly revenue of $53.3 billion, an increase of 17 percent from the year-ago quarter, and quarterly earnings per diluted share of $2.34, up 40 percent.

In other words, Apple made 40% more money by selling LESS.

The strategy of selling higher price iPhones is proved working.

Users who spent so much on a phone are more likely to spend more in Apple Store, Apple Care, iTunes, and Apple Cloud service – the higher margin sectors. Revenue from “Service” just surged 31% Y-o-Y in Q3 2018. This sector will grew even faster in coming quarters.

Selling less units means Apple now has less users to take care of, they can provide better service to their “honorable customers”.

Apple iPhone will soon be the phones for the privileged. Just like how private banking and business class flights are positioned for only high net worth customers.

If you think these services or products are expensive – it’s because they are not for you. Stop pretending, or forcing yourself to be what you are not.

Stop letting Apple to milk you. Get an Oppo or Xiao Mi.

Or why change phone when your old one still works fine?

According to the Bureau of Labor Statistics (BLS), the median wage for workers in the United States in the fourth quarter of 2017 was (pre-tax) $857 per week or $44,564 per year for a 40-hour workweek.

The iPhone price is not as expensive as you would “feel” in Malaysia. But it’s still a big portion on household spending, considering an average American spent just about $7,700 annually on food.

2- Spending on apps and in-app purchases

Just like past years, my team at WHSR has compiled a list of web hosting / domain companies running Black Friday promos. If you were

If you were considering to switch web host, register domain name, or purchase a new CDN / SSL – now is the best time.

But please, do not lose your mind and buy stuffs that you don’t need.

I am glad if you make use of our list to buy a new web host, start a business, and save some money in the same time. But I wouldn’t be happy if you spend money on a bunch of hosting accounts that you won’t use for the next 6 months.

Last year I had one of my writers to write some articles about Black Friday deals – he ended up falling for some of the deals and bought a bunch of domain names.

I bet half of those purchased domains remain undeveloped today.

Buy what you need, not what’s cheap.

And if you miss this year Black Friday, there’s always next year ;)

Happy Thanksgiving and Happy Shopping everyone.

The curious case of Black Friday: How it got started?

Black Friday is a shopping day for a combination of reasons.

As the first day after the last major holiday (Thanksgiving) before Christmas in United States, Black Friday marks the beginning of the year end holiday shopping season.

Additionally, people are usually getting the day off as part of the Thanksgiving holiday weekend.

The early 2010s have seen U.S. retailers extend beyond normal hours in order to maintain an edge or to simply keep up with the competition. Such hours may include opening as early as 12:00 am or remaining open overnight on Thanksgiving Day and beginning sale prices at midnight.

The trend continued and spread to other countries – first to Canada and United Kingdom, then Mexico, Romania, India, France, Switzerland, etc.

As one of the WordPress.org recommended hosts, I think that BlueHost (https://www.bluehost.com/) has a great reputation on many fronts since they were first introduced in the early 2000s. Their services have been touted by many reviewers calling attention to their great plan features such as a free domain offer and the like. Unfortunately, that was (mostly) before they were taken over by Endurance International Group.

HostGator (https://www.hostgator.com/) on the other hand has had just as great a run for its money and for just as long. They started out in the early 2000s but eventually got bought over by – you guessed it – Endurance International Group in 2012.

There is a Winner in Performance

Between these two hosts, technical performance isn’t really an issue.

We have seen HostGator clock up some extremely reliable and fast server performance and in fact it continues to do so. Tests have shown it to hold to a remarkable 99.99% uptime on occasion.

What makes them doubly impressive is the server response time form their US-based servers, which ring the bell at less than 50ms. This figure is extremely rare to see, and I am pretty sure has won them their fair share of groupies.

Yet BlueHost isn’t really a slouch in the speed and reliability department either since it manages an excellent above-99.85% uptime. Speeds were also good (albeit nowhere near HostGator) and it managed to meet a sub-500ms bar.

Although both HostGator and BlueHost gained positive results in past WHSR surveys, it should be noted that most of the time users preferred HostGator. I wonder if it has anything to do with that cute gator mascot of theirs.

Bluehost on the other hand did gain high marks from users for its newbie-friendly features such as the easy to navigate control panel. They also have a very easy growth path and allow their users to scale up plans at reasonable prices – including for VPS and dedicated hosting.

It also offers a lot in the way of security, but I am tending to discount this in the comparison simply because it is also attempting to charge top dollar for those extras – such as NGINX architecture, custom server cache, HTTP/2, SSD storage and so on.

Is there a Down Side?

Both hosts come with comprehensive support documentation which is a very good thing since they are both EIG companies now. HostGator fox example has been plagued by long waits for support in their live chat services and I expect that things won’t really recover in that area.

When it comes to renewal time for hosting plans – that is where both of thee hosts will hit you below the belt. Unfortunately, this seems to be an industry norm and there is no real way of walking out of this one unless you’re willing to move your website every two years or so.

Verdict: The Winner is HostGator!

If I’m forced to make a choice between these two web hosts, I would have to go with HostGator for their edge in technical performance. Also, because I like gators.

Jokes aside, even as I am suggesting HostGator as a preferred host in this comparison, I do feel that either one of these companies offer newbies and small site owners the opportunity for a reasonable buy in to their first web hosting experience.

They both offer good performance and are part of the mainstream crown, which, means that there really isn’t any way you can go wrong by choosing either.

*Disclosure: I am affiliated to both Hostgator and BlueHost. I receive referral fees (at no cost to you) from the companies if you make a purchase via the links shared in this post.

Easy to follow, helpful video to understand how modern economic works. The 30-minute video is (roughly) sectioned to the following:

Can you believe it? Google is no longer a teenager. The big brother has turned 20 years old in 2018.

Here’s an interesting article, written by Google Search VP Ben Gomes, in conjunction to the company anniversary: Improving search for the next 20 years.

For the next 20 years, Google wants to shift (to quote)…

All these sounds great. But… do read between the lines.

Every time Google says “First and foremost, we focus on the user….”, I get the feeling that something against the users’ interests is happening.

Be reminded that Google has been showing more and bigger ads in their search result pages repeatedly over the years. Read here, here, and here.

While Google is certainly serious about improving its users experience in overall. I suppose the shift in next 20 years also meant Google will

Does that red ball in the movie Minority Report comes into mind?

Nor there’s a data leaked.

The whole huh-ha about Cambridge Analytica, FB users’ privacy crisis, and Mark Zuckerberg’s testimony to Congress on main stream media is entertaining. Watching Mark’s responses to some of the questions remind me (a lot) of the movie “The Social Network”.

Many of these questions and writings are focusing on the shallows or issues that don’t matter.

When you are ready to dive deeper, I suggest reading:

If you wish to know how hard it is to please the almighty Google today, this is a good read.

In the name of “better user experience”, Google has been constantly exploiting small online businesses and pushing content publishers away.

Every new features being introduced in Google Search draws more internal links back to Google’s assets.

Good content, built with sweat and blood, by smaller publishers are being scrapped by force.

Many of us are creating more (and better) content to temporary solve the issue. But in the long run, there’s no escape from this downward spiral to 0% margin.

It takes good talent and lots of money to create good content.

…the time has come for Google to stop and think about the pact that built their nearly hundred-billion-dollar ad empire.

After all – what’s there to search after all independent publishers are driven out of business?

Recent Shareaholic traffic report indicates that web traffic pattern is shifting from social to search in 2017. Pinterest, Google, and Instagram came out as the big winners as Facebook share of visits dropped ~8% in 2017. Social network, in a whole, is no longer the biggest traffic driver for the 250,000+ sites (this blog included) using Shareaholic app. Instead, search is.

Search finally had a comeback year and overtook Social as the top traffic driver within our network.

A list with more than 60 hosting deals this Black Friday. Good time to switch if you are considering a new web host.